With everything going on in 2020, amidst a global pandemic, it was inevitable that Christmas was going to look a little different, and I don’t think anyone was particularly surprised when, with a week to go to the big day, the UK government put a stop to Christmas get togethers for large parts of the country.

One side effect of this, for better or for worse, was that I ended up with a 2kg turkey crown getting delivered on the 23rd to feed myself, wife and two young kids. Surplus of turkey aside, not having to cook for others also meant more freedom to experiment (it might be a little stressful being too experimental when cooking for in-laws and sister-in-law and family!).

So, I decided to have some fun, the plan was to sous vide the turkey crown in a water bath and then finish the turkey on the BBQ for a reverse sear approach.

1. What is Sous-Vide cooking?

I believe sous-vide originates from the French for under vacuum or something similar, but the basic premise is as follows:

2. What are the advantages of sous vide?

As just mentioned, the main advantage is that you can precisely cook food to exact temperatures, edg-to-edge. With other cooking methods, there is an inevitable variation in internal temperature, and as you always have a minimum temperature that you need to achieve throughout, that variation means some parts are over cooked. Sous-vide avoids that by never exceeding the target temperature.

It also has the benefit of being very forgiving, you can leave the food cooking for hours longer than you planned and it will never overcook (depending on the food, longer cooking can have other less desirable effects, but never over cooking or burning).

3. What are the disadvantages of sous vide?

One perhaps obvious, disadvantage is time - given this is low-and-slow taken to the n’th degree, this is slow.

Another thing to keep in mind, whilst not a disadvantage, is that it will never achieve the Maillard effect solely through sous-vide cooking. The Maillard effect kicks in at roughly 120 degrees centigrade and the boiling point of water being 100 degrees means this is never achievable. But this is a common result of cooking at lower temperatures, and is easily rectified using the reverse sear technique and finishing the food hot-and-fast to get the perfect sear.

The first thing I did in prep was to dry-brine (fancy way of saying I salted) the turkey crown just over 24 hours before Christmas day. I seasoned it with nothing but salt, I wasn’t looking for different flavours, just letting the turkey flavour come through.

I decided to go for a temperature of 66 degrees centigrade - a lot lower than a usual turkey cook, but still higher than a lot of recommendations (60 degrees was commonly recommended for turkey breast), and cooked it for a bit over five hours.

Once it was done, just after midday, I drained the meat juices into the gravy and patted the turkey dry - at this point, although I hadn’t cut it yet, it was beautifully juicy and moist inside, but as you might imagine it was pretty pale and anaemic looking. The final step before it could be served up was for the final sear. 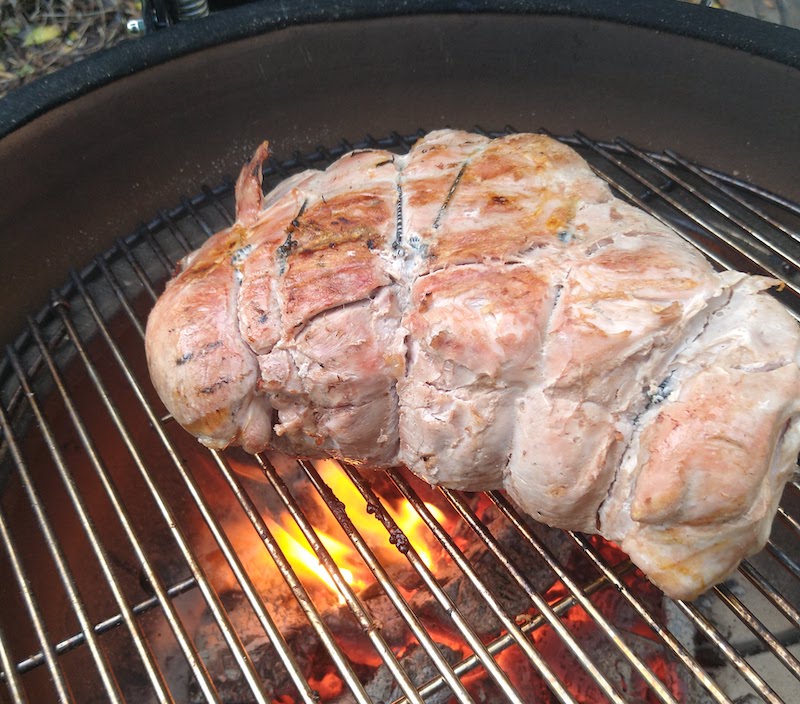 I had earlier lit the BBQ (the ceramic kamado BBQ) and it was now approaching 400 degrees centigrade under the lid - I threw the turkey crown on the grill and turned it a couple of times to nicely brown the skin before serving up.

In my opinion, it was my best Christmas dinner to date, and I will be trying it again for sure - the main realisation is that I should have done it caveman style and seared the skin directly in the coals, but thats for next year!