This is final part of a series of recipes that I created for a cooking competition that I am currently a part of. It’s specifically a BBQ competition run by Globalitc charcoal company, and the third round was themed “TV Dinners” - the idea being you had to BBQ a meal based on something from, or inspired by, a TV show or movie.

Having already covered my trio of Die Hard burgers (The Joe Takagi, Yippe-cayenne motherclucker, The Nakatomi Tower burger) my final part was a dessert.

This took a lot of thought, and was struggling for a long time to come up with something - even something basic that I could somehow link to the film was proving tricky, but this part was my favourite in terms of presentation.

One of the many iconic scenes in the film is where the terrorists realise that John McClain doesn’t have shoes on, and being in a large open plan, modern office there are lots of glass interior walls and windows - Hans Gruber gives the instruction to “shoot the glass”. John McClain escapes the confrontation but not without walking over the shards of broken glass leaving him with very sore, bloody feet, left to limp off to a bathroom to try and remove the glass from his feet.

The dessert is a simple madeira cake (I used a Nigella Lawson recipe), cooked on the BBQ at 170C for about 75 minutes, and then decorated with bloody footprints and shards of glass! Of course, no one could eat actual glass, so I made some sugar glass my mixing equaly parts sugar and water and boiling it down in a pan until its thick, pouring it out to set and then shattering it. 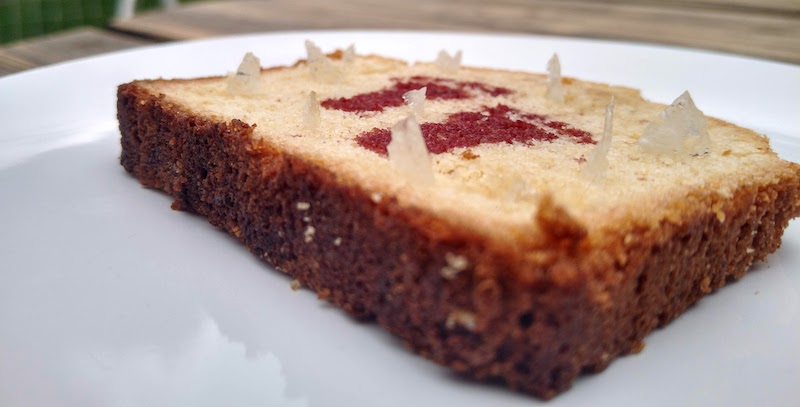 The bloody footprints took a couple of attempts, I tried a stencil at first which didn’t work as the colour just ran. In the end I resorted to painting them on with a fine paint brush (a clean one!), the colouring was just watered down red food colouring.